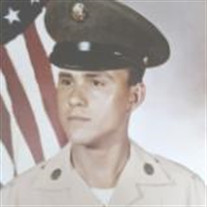 Celebrating the beautiful life of Adolf Durand On August 26th, 1953 Adolf was born to Hermania Mendoza and Willie Durand in small town Poteet Texas. Since his birth Adolf has been a proud Texas native. Adolf Durand passed away peacefully on October 16th and went to be with his Lord at the age of 68 years in the year 2021. Adolf was active in the United States Army for 16 years where he earned the National Defense service Medal, Overseas Service Ribbon, Advanced Officer Training, Air Assault Badge, and his Expert Marksmanship Badge. Adolf is survived by his wife Belma Durand, and Lovingly remembered by his children; Tina (Richard) Perez, Cherie (John) Escamilla, Adolf Jr (Kim) Durand, Jennifer (George) Amaya, Alexandra Durand, James Durand and Christy (Nathan) Guzman. Grand Children; Alana, Alina, Arianna, Clarissa, Mari-Celeste, Arthur, Adolf III Antoine, Sonia Healani, Pheebe, Roy, Ray, Elexia and Elisia, Naomi, Anthony, Isaiah, Evan, Riley, Nathan Jr and Camryn Adolf is also remembered by multiple nieces, nephews, and numerous friends and extended family. Fill not your hearts with pain and sorrow, but remember me in every tomorrow. Remember the joy, the laughter, the smiles. I’ve only gone to rest for a while. Although my leaving causes pain and grief, my going has eased my hurt and given me relief. So dry your eyes and remember me, not as I am but as I used to be. Because, I will remember you all and look on with a smile. Understand in your hearts, I’ve only gone to rest a while. As long as I have the love of you, I can live my life in the hearts of all of you. A public visitation will take place at Camero Funeral Home at City base Chapel starting at 4:30 PM A Christian Service will start at 6:00 PM in the funeral home chapel. Care has been entrusted and guided by the staff of Camero Funeral Home at City Base.

Celebrating the beautiful life of Adolf Durand On August 26th, 1953 Adolf was born to Hermania Mendoza and Willie Durand in small town Poteet Texas. Since his birth Adolf has been a proud Texas native. Adolf Durand passed away peacefully... View Obituary & Service Information

The family of Adolf M. Durand created this Life Tributes page to make it easy to share your memories.

Send flowers to the Durand family.