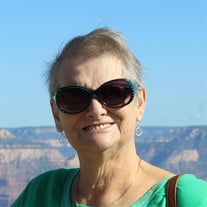 Beverly entered eternal rest on Wednesday morning March 7th 2018 at the age of 70 years. Beverly was born February 11, 1948 in San Antonio Texas to Dorothy and George Warden. She was later adopted by August Peterman. She was the oldest of four children and lived in the San Antonio area most of her life. At the age of 20 she met James Allen Johnson while he was stationed at FT Sam Houston, Texas. They were married on August 17, 1968 in Fort Meyers, Florida. They had three daughters and were married for 16 years. Beverly worked in banking for almost 40 years. She retired as an assistant executive vice president from Security Service Federal Credit Union after 27 years of service. She had a passion for serving her church, her family, and her community. Her hobbies included reading, playing cards with friends, vacationing in New Mexico, and having “Nana Days” with her grandchildren. She attended Southeast Baptist Church where she served God and enjoyed fellowship with her sisters of faith. She was a member of the Rebekah Assembly of Texas. Beverly was first and foremost a woman of God. She was a loving Mother and devoted Nana. She was also a dedicated daughter, sister, aunt, and friend. Beverly was preceded in death by her parents Dorothy Powell, George Warden, and August Peterman. She is survived in death by her sisters Mary Oaks and husband Lou, Virginia Pogue and husband Kenny. Brother Richard Peterman and wife Terry. Her Daughters Amber Johnson and husband Luis, Dorothy Johnson, Jami Reynolds and husband Richard. Seven grandchildren Ashley Ramos, Amanda Ojeda, Kurtis Sedares, Tayler Sedares, Katelyn Reynolds, Bethany Reynolds, and Braeden Reynolds. Also various cousins, aunts, uncles, nieces, nephews and many dear friends. Some of these include Evelyn Smith, Karen McQueen, Laura Cohrs, and Liz Hale. It was Beverly’s wish to be cremated. In Lieu of flowers Beverly requests memorials be made to: ASPCA, Wounded Warrior Project, Project Smile, or donor’s choice. Family was comforted to know several people in the San Antonio area will be blessed with Beverly’s generous gift of tissue donation. Please consider blood and organ donation “Blessed are those who mourn, for they will be comforted.” Matthew 5:4

Beverly entered eternal rest on Wednesday morning March 7th 2018 at the age of 70 years. Beverly was born February 11, 1948 in San Antonio Texas to Dorothy and George Warden. She was later adopted by August Peterman. She was the oldest of four... View Obituary & Service Information

The family of Beverly Ann Johnson created this Life Tributes page to make it easy to share your memories.

Send flowers to the Johnson family.