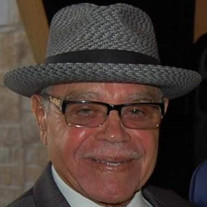 Charlie Smith Ramirez (Uncle Charlie), was born on May 23, 1941, in Ames, Texas and he fell asleep in death at the age of 79 on Thursday, July 23, 2020. He was raised in Liberty, Texas, leaving home during his teenage years traveling North where he learned and developed his carpentry, music and singing skills. He also traveled to parts of Europe and Asia with the U.S. Military. In the 1960’s he returned home to Texas and married Beverly, together raising their beautiful family in Victoria. Uncle Charlie came to know Jehovah God and dedicated his life to Him on May 27, 1973. Years later, he moved to San Antonio in 2004, where he met his wife, Anna, and they were married for 15 years. Uncle Charlie had a special love and affection for his children, family and friends, demonstrated by the time he devoted to visiting and helping them all. He was a skilled craftsman in the carpentry industry working tirelessly throughout his life and meeting any challenge set before him. Uncle Charlie was also gifted at creating delicious meals, always sharing and teaching others his culinary skills. In his free time, he enjoyed shooting and winning many games of pool, watching the Spurs, football and baseball games. However, above all, his greatest love was for his God, Jehovah. He spent countless hours in the ministry talking to others about what he learned from his study of the Bible. He firmly believed and preached about the sanctification of Jehovah God’s name and the good news of God’s Kingdom, which holds out a promised hope of a future everlasting life on earth free of sin and death. Uncle Charlie lived a fun, full life and was a loving and caring son, brother, husband, father, uncle and friend to many. His charming character, his caring and loving ways, his energy, his love for life and his infectious laughter will be missed more than words can describe. Simply put, he is unforgettable. Uncle Charlie is preceded in death by his father, Emory Smith, his mother, Ella Ramirez; sisters, Christina Medina, Susie Ramirez, Shirley Carmier; brothers, Ben Ramirez, John Ruben Ramirez; daughter, Chaquida Ramirez and grandson, Vonsell Ray Ramirez. He is survived by his wife, Anna Lopez Ramirez, his sister, Effie Walker; brothers, Russell Godfrey Ramirez; Frank Ramirez; children, Michelle Dennis (children, Justin, Jessica, Reuben), Tammy Ramirez (husband, Brian; children, Tasha, Joshua, Javonta, and Jareese), Yolanda Ramirez (daughter, Eryn), Cynthia Shillings (husband, Justin; daughter, Kirstyn), Raymond Ramirez (wife, Taisha; children, Raven, Malik, and Cadilayah), Daniel Ramirez (son, De’Oshkneiy), Charlene Moreno (husband, Marcus; children, Damond, Emarii, J’marcus, and Keilan); 13 great-grandchildren, numerous nephews, nieces, and cousins, all who loved Uncle Charlie immensely. Due to the current social distancing environment, restrictions placed on large gatherings, and for the love and safety of family and friends, the memorial service for Uncle Charlie will be held virtually on Saturday, August 15, 2020 at 2:30 p.m. Please join Uncle Charlie’s memorial service using Zoom: Date: Saturday, August 15, 2020 Time: 2:30 p.m. – Memorial Video and Service Talk Zoom: Meeting ID: 210 775 5166 Password: 2802 If you wish to express your condolences, please send in the form of a card addressed to The Family of Charlie Smith Ramirez, in care of: Anna Lopez Ramirez 2014 Schley San Antonio, Texas 78210 Charlene Ramirez Moreno 3105 Swan Drive Victoria, Texas 77901 Jonie Ramirez Pearson 1511 Greer St. San Antonio, Texas 78210

Charlie Smith Ramirez (Uncle Charlie), was born on May 23, 1941, in Ames, Texas and he fell asleep in death at the age of 79 on Thursday, July 23, 2020. He was raised in Liberty, Texas, leaving home during his teenage years traveling North... View Obituary & Service Information

The family of Charlie Smith Ramirez created this Life Tributes page to make it easy to share your memories.

Send flowers to the Ramirez family.