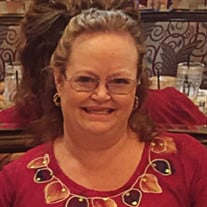 DEBORA (Debbie) ANN BLUM-ALLAIRE, 58 of San Antonio, beloved sister, mother, mother-in-law , aunt, great aunt and grandmother was called home to her Lord on Monday, June 19, 2017 following a chronic illness. In her honor, a memorial service will be held on Saturday, July 8, 2017 at 12p.m. at Alamo Brooks Cremation, 3706 S. W.W. White Rd., San Antonio, Texas 78222. Debbie was born May 9, 1959 to Elva Lee and Carl Blum in Beaufort, South Carolina, where she was raised with her sister Linda. Having been raised in a Marine Corp family, following her father’s eight transfers the family moved to San Antonio in 1970. She married her then husband of 26 years Edmund Allaire II, July 14, 1979, and gave birth to their two boys Edmund Allaire III, December 11, 1980 and Curtis Allaire, January 31, 1983. After receiving her diploma from Douglas MacArthur High School in 1977 she took on a position as a data entry clerk at an insurance company for two years prior to her final employment with H.E.B as a cashier. One of her passions was keeping in touch with everyone who entered her life. She would write letters, send pictures even make phone calls to let everyone around her know she was thinking of them. She was the most loving and caring grandmother to her only grandchild Edmund Allaire IV. From creating beautiful art work together to playing hide and seek indoors and swinging outside, just to name a few. She was a strong, caring and loving lady who will be greatly missed by all who knew and loved her. Left behind to cherish the memories are her father Carl L. Blum; beloved children, son Edmund Allaire III and spouse Jeanette Torres; son Curtis Allaire; her sister Linda Flores; brother-in-law Ernest Flores; her grandchild who adored her Edmund Allaire IV; niece Amber Flores-Spenrath and spouse Jason Spenrath; nephew Justin Flores; great niece Piper Spenrath and great nephew Ayson Spenrath.

The family of Debora (Debbie) Ann Blum-Allaire created this Life Tributes page to make it easy to share your memories.

Send flowers to the Blum-Allaire family.