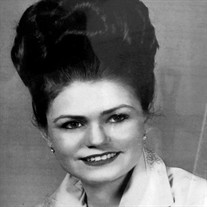 Dolores Carol Allen Nieto Perez McIntosh was born to Jack Allen and Hedwig Raudies on December 25th, 1935 in Jamaica Long Island, New York. She went to live with her adoptive parents her uncle Angel and aunt Michaela Nieto in San Antonio at five years old. She attended Highland Park Elementary and graduated from Saint Gerard’s High School in 1953 after which she worked for Bell Telephone Company as a long-distance operator. She met her husband of forty-nine years, Rudy Perez, Jr. while on a blind date to see the movie, The Bad Seed. They were married on May 25th, 1957 at Saint Gerard’s Catholic Church. Dolores and Rudy had four children, Michael, Carole, William, and Roseanna. The family lived in San Antonio, Arlington, and finally Lake Buchanon after his retirement from the A.P.W.U. Upon Rudy’s death, Dolores returned to San Antonio to be near her daughters. Dolores met her second husband, Bruce McIntosh, in the Del Webb Hill Country Retreat. They enjoyed ocean and river cruises and traveled throughout the world. She was a member of the Mayor’s Commission on the status of women. She also was the secretary to the former Texas State Senator, Frank Lombardino. Throughout her life Dolores volunteered her time and efforts for many charitable causes and organizations such as, Santa Rosa Hospital of Westover Hills, a reading mentor with Northside School District, and many hours dedicated through her involvement with the Ladies Auxiliary of the Knight of Columbus. She was the keeper of family lore and often relished in telling stories of her days in San Antonio and her travels with both Rudy and Bruce. Dolores was preceded in death by her first husband, Rudy Perez Jr. Survivors include: husband, Bruce McIntosh; her children: Martin Michael Perez, Carole Elizabeth Blair, William Anthony Perez, and Roseanna Marie Perez; grandson Graeham Newton Blair; and son-in-law Dr. Tim Martindell, god-child Maggie Hayes; along with Bruce’s children Christopher & Kristen Weber, Jeffrey & Tracy McIntosh, Michael & Jackie McIntosh and grandchildren Zachary, Austin, Megan Weber and, Benjamin, Ryan, Ella and Lainie McIntosh, and Brandon and Heather McIntosh, and numerous nieces and nephews. Visitation will be held on Thursday, June 22 from 5 to 9 p.m. with a Rosary at 7pm at Alamo Brooks Cremations, Plus | 3706 S WW White Rd., San Antonio, TX 78222. A Mass will be celebrated on Friday, June 23 at 10 a.m. at St. Anthony Mary Claret | 6150 Roft Road, San Antonio, TX 78253. Services under the direction of Alamo Brooks Cremations, Plus.

The family of Delores Carol Allen Nieto Perez McIntosh created this Life Tributes page to make it easy to share your memories.