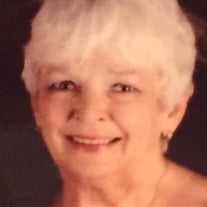 Kathryn Elizabeth (Cullum) Lee was born Dec. 7, 1936 in Dallas, Texas to Earl O. Cullum and Louise H. Cullum and died peacefully in her home on Dec. 20, 2017 in Adkins, Texas at the age of 81. Kathryn was known as Mom, Grandmom, Nana and Kaye (to her many friends). Kaye is preceded in death by her parents Earl and Louise Cullum, her brother Richard and Kenneth Cullum and her son in law Timothy Thomas. She is survived by her loving husband of 57 years, Edward G. Lee; Daughters, Kathy Thomas and Carolyn Hoyt (Steve); Son, David Lee and Stepson Gary Kent; Her grandchildren: Jennifer Ball, Tyson Thomas (Shari), Dana McDonald (Shawn), Denise Miller (Bryan), Scott Thomas (Lindsey); Her greatgrandchildren: Journey Bain, Tanner Thomas, Weston and Shelby McDonald, Blake and Brooke Miller; Brayden and Kaydy Thomas; Her niece Lisa Burkard (Mike), and nephews Joel Cullum (Susan), Doug Cullum (Tim), Chad Cullum (Kim) and Matthew Cullum(Shelly); as well as numerous cousins. Kaye worked Civil Service for over 20 years until she retired while at Brooks Air Force base. She and Ed moved to Miami, Ok where they had met when she was 14. They lived there several years until they decided to become full time RV’rs in 1999. They traveled all across the United States and made many friends. After almost 15 years on the road, they settled down in a home they built next to their daughter and son in law. Nothing made her happier than being around her family. In lieu of flowers please make a donation to the American Cancer Society. Mrs. Lee's services are pending. A columbarium internment at Fort Sam Houston National Cemetery will be held on January 26, 2018 at 10:15 am. Arrangements under the care and direction of the funeral service professionals at Alamo Brooks Cremations and Funeral Home, 3706 South WW White Road, San Antonio, TX 78222; 210-502-7333.

Kathryn Elizabeth (Cullum) Lee was born Dec. 7, 1936 in Dallas, Texas to Earl O. Cullum and Louise H. Cullum and died peacefully in her home on Dec. 20, 2017 in Adkins, Texas at the age of 81. Kathryn was known as Mom, Grandmom, Nana and Kaye... View Obituary & Service Information

The family of Kathryn Elizabeth (Cullum) Lee created this Life Tributes page to make it easy to share your memories.

Send flowers to the Lee family.