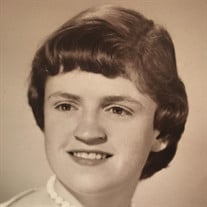 Laura Lou Lucks was 80 years old when the Lord called her home and she peacefully passed away on July 31, 2019 of natural causes. She was a resident of San Antonio, Texas. She was born on September 14, 1938 in St. Louis Missouri…just 5 weeks later than her future husband in the same hospital. Laura graduated from Beaumont High School in 1957. During her high school years, Laura was active in her church youth group, she played first base on a competitive soft ball league that won a St. Louis city-wide title, served as a swimming instructor for her high school, and was a member the roller skating team. Immediately following graduation from Beaumont High, she married the love of her life and high school sweetheart, William “Bill” Lucks. They then headed off together to East Baptist Texas College in Marshall, Texas where Laura pursued her studies in physical education. In 1962, Laura became a military wife when her husband, Bill enlisted in the U.S. Army. Laura and Bill became parents to their daughter, Carol, in 1968 then their son, Chris, in 1970. During their time spent as a military family they lived in Kentucky, Germany, New York, California, and Hawaii. In 1981, their family settled in San Antonio, Texas where Bill then retired after 22 years of military service following his final assignment at Ft. Sam Houston. While in Germany and Kentucky Laura worked at the Military Recreation Centers. Her career path then lead her to serve as a church secretary in Kentucky. Upon relocating to Brooklyn, New York she was hired as the secretary to the Chaplain, Dr. Duncan Stewart at the U.S. Army Chaplain School. Eventually she landed in San Antonio, Texas where she reconnected with Dr. Stewart and proceeded to serve as the Covenant Presbyterian Church Office Manager supporting Dr. Stewart, Dr. John Judson, and a long list of associate pastors over her 18 year tenure. Laura was an amazing woman in that she was a wife, a mother, grandmother, career woman, homemaker, sister, aunt, great friend…and she did it all beautifully. She embraced her husband and supported his career as a dedicated, loving, and flexible military wife. She embraced her children, loving them, guiding them, caring for them, and supporting them in all that they did. She embraced her grandchildren, adoring them, spending countless hours caring for them, taking them on trips and outings, cheering them on, and lavishing them with unconditional love and laughs. She embraced her career with dedication, ownership, and passion. She made a lovely and hospitable home, wherever her family landed at each reassignment. She approached each move with enthusiasm and a sense of adventure. She made each new house a home and welcomed new friends and relationships wherever she went. She also cherished the established relationships, both family and friends, that she made along life’s journey. She was always very active in the life of the church. She loved to be involved in bringing people together to celebrate special occasions, laugh together, and play games. She had a sharp mind and she kept everything organized and humming along – be it at work, at home, or socially. She was very loved by her family and friends. Laura is survived by her husband of 62 years, Bill Lucks, daughter Carol Martinez and her husband Richard Martinez, Son Chris Lucks and his wife Lisa Lucks, brother Ralph Hord and his wife Jean Hord, Brother in law Art Rosengren, grandson Nicholas Von Aschen, granddaughter Katherine Von Aschen, grandson Noah Martinez, grandson Alan Stanton and his wife Bianca Stanton, grandson Charlie Laurie granddaughter Joy Laurie, grandson Noah Lordan, and 3 great grandchildren. She is proceeded in death by her sister, Roxie Rosengren. A memorial service and luncheon to celebrate Laura's life will be held on Saturday, August 17 at 11:00 at Covenant Presbyterian Church. 211 Roleto, San Antonio 78213.

Laura Lou Lucks was 80 years old when the Lord called her home and she peacefully passed away on July 31, 2019 of natural causes. She was a resident of San Antonio, Texas. She was born on September 14, 1938 in St. Louis Missouri&#8230;just... View Obituary & Service Information

The family of Laura Lou Lucks created this Life Tributes page to make it easy to share your memories.

Laura Lou Lucks was 80 years old when the Lord called her home...

Send flowers to the Lucks family.