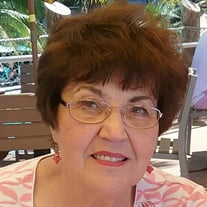 After a lengthy battle with Parkinson’s disease, Linda K. Comer passed away on Friday, June 22nd, 2018 in San Antonio, Texas just shy of her 73rd birthday. Linda was born in Connellsville, PA on June 25th, 1945, a daughter of the late John Orbin and Edna Meeks Orbin. Linda grew up in Ypsilanti, MI and graduated with honors from Willow Run High School. Afterward she attended Schoolcraft College in Livonia, MI where she obtained an Associate’s Degree in Accounting Applied Science. She also had a deep interest in music and was the lead singer in a country band. Linda married her childhood sweetheart, Jack Comer just days before her 18th birthday on June 22nd, 1963 in Ypsilanti MI. They resided in Westland, MI for 5 years and gave birth to two children. Later they moved to Plymouth, MI where they remained for 41 years until migrating to Texas in their later years. Linda was a dedicated wife and mother who worked part time while bringing up young children. Later she worked for Michael T. Fant and Associates in Plymouth, MI. She was an accountant and tax preparer for 10 years until she retired in 2005. Linda was diagnosed with Parkinson’s disease in 2005. She bravely underwent deep brain stem surgery in the fall of 2009 which significantly improved her quality of life. Linda is survived by her husband, Jack Comer; two children, Robin Comer Efron and husband James A. Efron of Pompano Beach, FL and Brian Comer, wife Kim Hedtke Comer of Texas, grandson Brady Comer, sister Nancy Anderson and brother Calvin Orbin, as well as several nieces and nephews. In addition to her parents, she was predeceased by a brother, Bob Orbin. Linda requested cremation. Her ashes will be interred at Parkview Memorial Cemetery (www.parkviewmemorialcemetery.com) in Livonia, MI. A memorial will be planned at a later time and date to be announced. In lieu of flowers, kindly consider a donation to The Parkinson’s Foundation (http://www.parkinson.org/) tribute page in her name.

After a lengthy battle with Parkinson&#8217;s disease, Linda K. Comer passed away on Friday, June 22nd, 2018 in San Antonio, Texas just shy of her 73rd birthday. Linda was born in Connellsville, PA on June 25th, 1945, a daughter of the late... View Obituary & Service Information

The family of Linda K. Comer created this Life Tributes page to make it easy to share your memories.

After a lengthy battle with Parkinson’s disease, Linda K. Comer...

Send flowers to the Comer family.