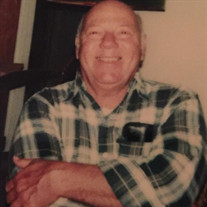 Noah W. Simpson was called Home by our Lord on May 31, 2019 at the age of 98. Noah, known by most as Bubbie, was born on March 28, 1921 in Muskogee, OK to Noah W. and Marie (Gausseran) Simpson Sr. He was the oldest of 13 children. Noah spent his childhood growing up in San Antonio, TX. He was just 14 years old when his father passed away, leaving him to help raise his siblings. The Union took Noah in to teach him the trade his father knew, of lathing. At the age of 21 he was drafted into the United States Army where he would later fight in World War II in the Philippines and Okinawa. After being honorably discharged, Noah went back to being a metal lather. With many years of dedication and commitment to the trade, he became the first president of Arahed Lathing Corporation in San Antonio. After 19 years of leadership and helping to build the business, Noah retired. He remained active in the company as the Secretary Treasurer. At a very early age Noah selflessly and willingly accepted the responsibility of raising his brothers and sisters. He had the most generous heart and kindest spirit. He had a passion for gardening, traveling, trips to Las Vegas, hunting, and fishing. He would take his nieces and nephews to the hunting lease and go on family trips with them. The family has the “Noah’s Ark” coast house that they all built together. The memories of gathering here with Bubbie will be forever cherished. Noah is survived by his sisters, Lorena Simpson, Marian Goodman, Carolyn Thomas, Loretta (Wallace) Vaughn, and Judy (Kenneth) Anders; and his brother, Patrick (Mary Frances) Burns and numerous nieces and nephews, great nieces and nephews, and great-great nieces and nephews. He is preceded in death by his Father, Noah W. Simpson Sr and Mother Marie (Simpson) Burns; his brothers, Gerald, Lindbergh, and Chamberlin and his sisters, Cecilia Holt, Gloria Neely, and Betty Jean Smalls. “Bubbie” will be greatly missed by so many who have wonderful memories of the loving, friendly, strong, and giving man he was. The following arrangements have been made to honor Noah: Rosary and Funeral Mass to be held on July, 1, 2019 at 11:00 AM at Margaret Mary Catholic Church at 13145 Fair Ave. San Antonio, Texas 78223. A memorial service and honors ceremony to follow at Fort Sam National Cemetery at 1:15 PM at 1520 Harry Wurzbach Road. San Antonio, Texas 79209. -- Remind yourself daily to be grateful for everyone and everything you have. Arrangements made under the care and support of Alamo Brooks Cremations, Plus.

The family of Noah William Simpson created this Life Tributes page to make it easy to share your memories.

Send flowers to the Simpson family.