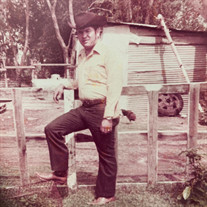 Ricardo Ollervidez entered into rest on Monday, November 11, 2019 at the age of 78. Mr. Ollervidez was born in Hargill, Texas on April 3, 1941 to Juan and Eyra Ollervidez. Mr. Ollervidez is preceded in death by his parents, Juan Ollervidez,... View Obituary & Service Information

The family of Ricardo Ollervidez created this Life Tributes page to make it easy to share your memories.

Send flowers to the Ollervidez family.