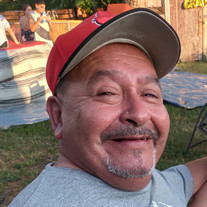 Robert Anthony Cruz-The Turtle, The Rock, Rocky, Tio Bobby age 68 years old, of San Antonio, Texas went to be with the Lord on November 15, 2021. The visitation and funeral service will be held at 4:00 p.m. on November 29, 2021 at Camero Funeral Home-City Base. Deacon Nestor Huizar, will be officiating. Robert was born in San Antonio, Texas on August 1, 1953. He attended Lanier High School and entered the workforce early to provide for his family. Robert worked as a custodian for Southside Independent School District for 10 years. Previous to working as a custodian, Dad was a self-taught certified welder. He worked the trade from the early 70’s through the early 90’s. Dad’s biggest hobbies were watching his San Antonio Spurs (“whoop there it is!”)and Dallas Cowboys, he was a diehard loyal fan to his teams. Dad LOVED his family with all his heart and enjoyed visiting his grandkids, his family, his brothers and his friends every weekend without fail. He also loved BBQ’ing, dancing, laughing and drinking beer with his favorite music and anyone who wanted to have a beer. Robert lived his life with a smile, even through the rough times. He never allowed for anyone to ruin his shine and was a big teddy bear. Our Dad was a hard worker his entire life but always made sure to put his family first. As Dad would always say “Take it easy Papa!” Robert is survived by his spouse, Maria L. Cruz; his daugthers, Lisa Barrientes, Olivia Cruz and Veronica Cruz; his grandchildren, Lidia Barrientes, Xavier Lopez, Analisa Barrientes, Isaac Lopez, Victoria Lopez, Jacob Cruz and Izabella Lopez; his brothers, Ruben Cruz Sr. (Frances), Richard Cruz, Sr.(Isabel); sister, Rosario Cruz; and brother, Antonio "Tony" Cruz, Jr.; as well as his nieces and nephews and numerous friends and his beloved dog, Canelo. Robert is preceded in death by his parents, Ramona Cruz and Antonio Cruz and step-mother, Genevieve Cruz.

Robert Anthony Cruz-The Turtle, The Rock, Rocky, Tio Bobby age 68 years old, of San Antonio, Texas went to be with the Lord on November 15, 2021. The visitation and funeral service will be held at 4:00 p.m. on November 29, 2021 at Camero Funeral... View Obituary & Service Information

The family of Robert Anthony Cruz created this Life Tributes page to make it easy to share your memories.

Send flowers to the Cruz family.