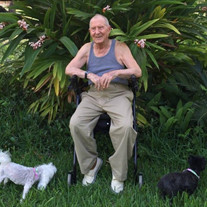 Robert Earl "Pete" Morris, 97, went to be with the Lord on November 6, 2017, where he joined his loving wife of 70+ years, Viola Walker Morris (6-27-22 to 4-27-09). He was born to Bertha Loring and Clint Morris in House, New Mexico, 2-15-20 on their kitchen table. He attended school and was a star basketball player in House, married Viola Walker 9-24-38, joined the U.S. Army Air Corps in January 1941, serving as a Corporal, last assignment as putting the Control Tower in operation in Australia during World War II until September 1943. He farmed and ranched in the House area, served as Fire Chief of the Volunteer Fire Dept, manager of the House Coop, drove a school bus for many years, and raised thoroughbred race horses before moving to T or C, NM where he lived for 19 years then moving to Pleasanton, Tx to be closer to his son after the passing of Viola, where he lived and enjoyed his 2 1/2 acre property, planting and growing several fruit trees and lots of beautiful flowers, sitting in the sunshine enjoying the song birds, hummingbirds, and butterflies, and most of all, enjoying all of the many visits by his loving children, grandchildren and great grandchildren - he loved people visiting him! He dearly loved life and people, and people loved him - he was always positive and happy to the very end. He was preceded in death by his brother Spence Morris, sisters Beryl Morris and Pearl Snipes, by his beloved Viola in 2009, and by his loving daughter Roberta Montague (1945 - 2011) but is survived by her husband Bert Montague of House, grandsons Billy Bob Parker and children Brianna, Bobby Jo, Olivia and their families, all of Amarillo, Tx, by Lewis (Dona) Parker and children Dawn Eve, Auburn and their families, all of Amarillo, Tx, by his granddaughter Jowanna (Robby) Staump and children Trisha, Jessica and Jacquelyn and their families, all of Clovis, NM. He is survived by his two daughters and one son. Daughter Cheryl Preisser (Jarry Bachmann) of Lamar, Co, children Melonee (Kirk) Marcum, Kylee and Kelcee of Xenia, Ohio, Joei Avant (Marlon Seal), Myranda, Isaiha, and Ryan of Penrose, Co, Chantille (Steven Hernandez) Preisser, Evan and Colton of Colorado Springs, Co. Daughter Rhonda Lodholm, Tesha and Skylar of Leander, Tx. Son Gary (Pam) Morris of Pleasanton, Tx, children Courtney Cole, Kinley Cubides, Carter of Tampa, Fl, Ashley (Heith) Sander, Darci, Zane and Mattix of Seiling, Ok, Cassie Morris, Dalton and Jackson of Pleasanton, Tx. He is also survived by his little sister, Gay Blair of Albuquerque, NM. Also surviving are 10 grandchildren, 24 great grandchildren, 16 great great grandchildren and many numerous loving nieces, nephews, cousins and friends. Interment and gravesite services will be held on Saturday November 18, 2017, 12 noon, at House Cemetery and we encourage anyone who would like to reminisce about Pete to please do so! A Celebration of Life for both he and Viola will immediately follow at the House Community Center. Flower arrangements are being handled by Wild at Heart Floral (575 461-3344) or in lieu of flowers, donations may be made to the House Community Center in memory of Pete and Vi. Services under the direction of Alamo Brooks Cremations, Plus.

The family of Robert Earl "Pete" Morris created this Life Tributes page to make it easy to share your memories.

Robert Earl &quot;Pete&quot; Morris, 97, went to be with the Lord on November...

Send flowers to the Morris family.