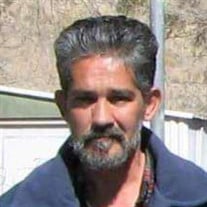 Wilfred John Saavedra passed away on Saturday, November 13, 2021, in San Antonio, Texas at the age of 68. He was born April 27, 1953, to Velda and Serafico Saavedra in Grants, New Mexico. Wilfred is proceeded in death by his parents Serafico... View Obituary & Service Information

The family of Wilfred John Saavedra created this Life Tributes page to make it easy to share your memories.

Send flowers to the Saavedra family.